For more than thirty years Rosalind Crisp has been taking the lead from her dancing body, evolving a field of choreographic principles and tools that enable a dance artist to produce movement from any part of her body, in any direction, at any speed or effort, at any time. Her tools guide the attention of the dancer to her dancing, to the continual flow of physical, spatial and sensory information for decision-making in the present moment. The body is approached by undoing it from held tension and unquestioned pathways. Breath, weight and sensation are prioritised. A range of practical tools is explored for sourcing movement from touch, texture, imagination and every part of the dancer's body - parts that are anatomically segmented or fictitiously separated and sensed. Attention is detached from presenting moves and is embedded in the continual emergence of material in a shared and porous relationship with the dancer's audience.

Beyond analogy, Crisp’s movement is astonishing in its sheer otherness, ... the standard syntax of dance is erased. It’s magical... RealTime 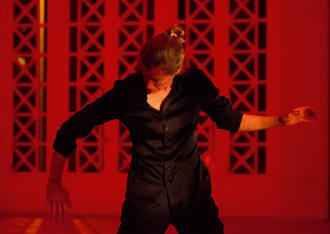 Level: Intermediate, Advanced
In English
Not barrier-free
With break