Sagí Gross named his choreographic method "Physical Script", as he likes to think about the dancers more as moving actors who use their bodies to produce "physical expressive words", instead of "movements.” He seeks to create meaning to every moment and movement and to articulate its meaning, within the context of the material provided by this physical language. He is attracted to the sense of present of being in the 'here and now'. The class focuses on different qualities and dynamics. Developing exercises that focus on articulating movements, to give space between the bones, joints and against the floor. Finding ways to individualize these physical ideas for each person, considering their needs and unique way of working. Further more, using musicality to develop and challenge. Motivating the dancers to enjoy and appreciate the technique, next to self awareness, as well as keeping a healthy mind and body.

Sagí Gross is a choreographer, teacher and performer. He was educated at Tellma Yellin school of the arts in Tel Aviv and Dutch National Ballet School in Amsterdam. He danced with Bat-Dor Dance Company, Dede Dance Company in Tel Aviv, the Israeli and the Dutch Opera houses, with creations by: Luciano Canito, Troy Mundry, Yaara Dolev, Amit Goldenberg, Andrew George, Yigal Perry, Nils Christe, Kimiho Hulbert and others. Since the age of 15 during his studies he followed a need for self expression with his own body language and authenticity. He has created over 40 pieces for different companies and academies around the world. Next to choreographing in theatres, he has also been involved in multidisciplinary projects in different locations, and as well created two dance films. He is developing his own choreographic method called 'Physical script', and has his own foundation GrossDanceCompany which is based in Amsterdam. At the moment Sagí is dividing his life between Berlin and Amsterdam. 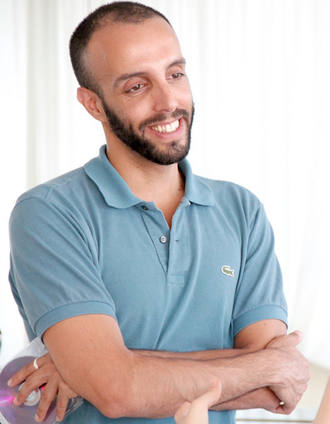