Perilously Efficient Movement – dance as form of survival. Is art doing this all the time? Might this be the very nature of dance but we have not attributed this language to it before? What if we do now? How and what do we learn from this perspective from our bodies in motion? Deborah Hay will provide a pre-determined sequence of movements to framework this collective research.

What I mean by perilously efficient is that dance, for me, is a form of survival. And therefore, to test my ability, my capacity to survive as a choreographer and performer, I choose to reduce stimulation that would otherwise influence the choreography, the practice, and the performance of my work. I am not ignorant of the danger in being ordinary nor the lack of quality in being efficient. Deborah Hay

Deborah Hay is one of the most radical and influential post-modern artists, who still expands our perception of dance. She dances, choreographs, writes, directs, and coaches. She has an Honorary Doctor of the Arts Degree from the Theatre Academy Helsinki and is an inaugural recipient of a 2012 Doris Duke Performing Artists Award. Her 4th book, Using the Sky is published by Routledge Books and a documentary film, Turn Your F^*king Head, about Hay’s Solo Performance Commissioning Project is now available from Routledge Books. www.deborahhay.com 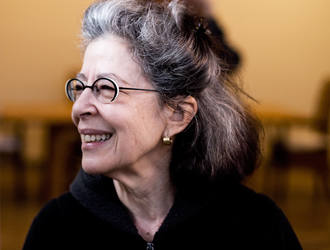 Level: Advanced + professional dancers
In English
With break
Not barrier-free
No discount for professionals possible