In the frame of Open Spaces - Laughing & Loving

In the film documentary, »Das Lachen der Antonia Baehr«, biologist Silke Kipper brings into view the special value of the stage as a place of laughter research, in mutual exchange with the artist. In the following lecture performance Antonia Baehr refers to her performance »Laugh« (2008), in which she explores this expression as a sovereign entity, in separation from causal baggage; jokes, tickles, narrative, humor looking at the thing itself: the sound and shape, the music, choreography and drama, the rhythm. Laughter as a group phenomenon and simultaneously as an object of empirical examinations reveals a seemingly endless richness of facets.

I like to laugh. I laugh often. I am often seen laughing. 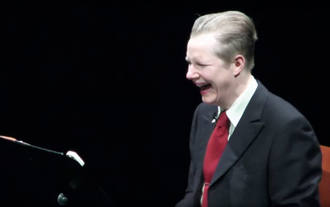