Yoga & Space. A Model For All Pervasive Reality - cancelled

In the frame of Sommer Tanz 2020 - Meeting in the Virtual!

Space is one of the five elements. It is non-objectifiable and only signified by two or more objects that create a relationship between themselves, space, which sometimes marks distance and other times describes an area where an object is not, like the space inside a pot, or pot space. The question arises, does the space belong to the pot or is the space independent of the pot? When you move the pot, do you move the pot space? Do the other elements effect space. Does air move space? Does fire burn space? Do all of the elements take place in space and yet, somehow space is completely free of them? Can this be a mirror for your own self reality, an all pervasive reality completely unaffected by everything in its presence, including the body? The philosophy of Yoga uses space as an ontological marker. This workshop will explore this ontological premise as it relates to form, i.e. Asana.

Sri Louise is an independent performer and Yoga teacher currently based in the high desert of Albuquerque, New Mexico. Increasingly critical of the culture surrounding Yoga, particularly in America, Sri Louise created a blog titled PostYoga, where she writes on the Intersection of Yoga, whiteness, anti-racism, anti-patriarchy, anti-capitalism, cultural-appropriation, colonialism, post-colonialism and decolonisation. Her workshops are intended to affirm Yoga as a Moksa sadhana, a path of liberation that does not psychologically bypass the limiting social borders constructed by race, class and gender, but actually participates in deconstructing the cognitive dissonance that many Euro-Americans maintain in their quest for personal freedom and spiritual well being. She is a long time disciple of Swami Dayananda Sarasvati, who is a traditional teacher of Advaita Vedanta with a remarkable ability to bring the ontological self into unmistakable view. 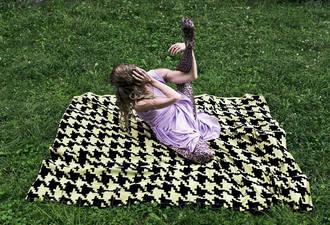