This workshop is based on traditional and modern dance techniques found in Dunham technique, Afro- Caribbean and Afro-Brazilian dance. They are very closely related yet uniquely different. The Shango, which one learns in Dunham technique is different from the Xangó found in Afro-Brazilian dance. The interplay between rhythm, expression, breath, balance and body control are important elements used to be able to differentiate between styles of dancing. Like the Caribbean sea as it flows into the Atlantic ocean we will flow through the warm-up and into the rainbow of dances, accompanied by live percussion. The warm-up, floor work and choreography prepare participants of all levels for an unforgettable journey. Time will be taken to explain character and meaning behind the traditional dances, the different styles within each dance form and its particular cultural significance. As a feeling of togetherness develops during the workshop, participants can focus on their calm, beautiful, ecstatic, strong and sensual selves by freeing their minds and just having fun.

Live Percussion: Cirlei Monteiro(BZ) und Andreas Weiser(DE)
Meryl Prettyman, was born in New York and received her professional dance training at Alvin Ailey American Dance Center in New York City, California Inst. of the Arts (BFA) and UCLA in Los Angeles, where she completed her MA in Dance/ Movement Therapy. She has developed her own style through working in different cultures. Since 1995 Meryl has been working as a teacher, dancer and choreographer in Berlin and throughout Europe. Right now her work focuses around her deepest roots and brings together Dunham Technique with Haitian and Afro-Brazilian dances. 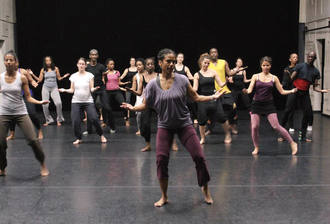