The lab will combine dancing, watching, reading, talking and dancing. Confronting your own interest in dancing and dance-making with examples from the recent past of dance-making will widen your personal foundation of possibilities and strengthen courage to continue to develop your own “language” in the present and future. Following the research of the performance project "Visible Undercurrent", we will look at the influences of dance-artists and choreographers, that developed their "language" in the early 1990s in New York, giving a big influence onto the European dance scene through teaching at the SNDO Amsterdam and EDDC Arnhem. The development of somatic practices for performance, improvisation and choreographic strategies will be explored as we meet the work of Eva Karczag, Jennifer Monson, Stephanie Skura, Ishmael Housten-Jones and Mary Overlie a.o.

Eszter Gál and Peter Pleyer both graduated in 1994 at EDDC and since then they have been collaborating in the field of Contemporary Dance making and teaching as well as participating in International Festivals. They have been involved in the program of P.O.R.C.H. – in Stolzenhagen Ponderosa – since 2010 coaching young dancemakers and co-teaching at ArtEZ Dance Academy Arnhem in 2013. .

2. & 3.4.15   16:00   open studio/showing
On 4. & 5.4. Uferstudio 14 will be available for participants' own rehearsals: 10€ per Tag.
Eszter Gál, Budapest. Dancer, teacher, performer, currently teaches at the University of Theater and Film Arts in Budapest, co-directs the program of the Kontakt Budapest Studio and has been organizing the annual International Improvisation Festival in Budapest since 2002. She is a certified Skinner Releasing Technique and a member of the mixed ability Company, called Tánceánia in Budapest. She has been part of EU funded International projects on documenting Contemporary Dance Education (IDOCDE / LEAP).The core of her interest is somatic-based movement research (PhD studies), improvisation performance and community work for dance education.

Peter Pleyer studied at the European Dance Development Centre (EDDC) in Arnhem before working with Yoshiko Chuma and Mark Tompkins as a dancer and choreographic assistant. He has lived in Berlin since 2000. From 2007 to 2014, he was Artistic Director of the Tanztage Berlin and from 2012 to 2014, a member of the Sophiensæle team. His interest as a choreographer and performer, dramaturge and coach, lies in finding new methods of integrating dance training, composition and improvisation into choreographic processes, such as, e.g., in the lecture-performance “Choreographing Books“ or in “Visible Undercurrent“ (2014). He teaches at various colleges and festivals in Europe and contributed to establishing a university course in Contemporary Dance in Berlin. 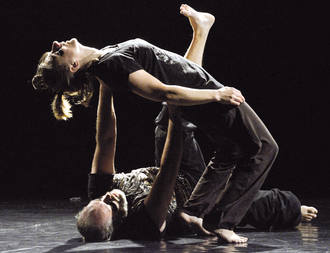