This intensive includes the workshop 'Open Source Forms  - Technik' and a second part to go further and deeper into the material.

Freedom + Rigor + Courage
Stephanie Skura developed Open Source Forms (OSF) after 12 years working closely with Skinner Releasing (SRT) creator Joan Skinner. OSF is about cross-fertilizations and deep commonalities of Skinner Releasing and creative process: shedding outer layers, finding primal energy, agility navigating subconscious realms, and imagery as powerful tool for transformation. Taking time for depth of technique to catalyze creative work, these sessions offer tools to access freedom, specificity, and courage in movement, vocal practice and performance. They empower participants to adapt these methods and discover their own. Open to all levels of experience in any art form.
Bring paper and pens for writing and drawing

2 weeks of intensive workshops with Stephanie Skura at Tanzfabrik Berlin and Ponderosa/Stolzenhagen - In a collaborative effort to bring years of courageous work and improvisational practices together, we have joined forces with Ponderosa/Stolzenhagen and invited Stephanie Skura to join us this summer. For a rich experience and to share the valuable material of Skura’s artistic viewpoint we highly recommend participating also in „Finding Forms“ at Ponderosa Tanzland Festival, taking place from 20. – 24.7. directly after the Open Source Forms Intensive at Tanzfabrik. Please register for each workshop separately. See www.ponderosa-dance.de for info and booking.

Stephanie Skura (USA/Seattle) ‘major American experimentalist‘, has researched, performed & taught movement & performance for three decades, with deep respect for individual diversity & subconscious realms. Creator and director of Open Source Forms, a practice and teacher training program focusing on deep commonalities of Skinner Releasing and creative process. Her New York City-based touring company performed worldwide for 15 years; she was on Graduate Faculty at the University of Washington School of Drama Professional Actors Training Program, and Core Faculty of the Skinner Releasing Institute, working closely with SRT creator Joan Skinner; holds a BFA & MFA from New York University Tisch School of the Arts; received seven Choreography Fellowships and five Dance Company Grants from the National Endowment for the Arts, one of the first “Bessie Awards” for Choreography, and numerous government, foundation and corporate grants, as well as commissions from several dance companies.
"Stephanie has been one of the most important influences in my dance career. She has amazing improvisation, performance and composition skills, which she shared with me throughout several years, permitting me to engage into what has become my ongoing process. She's one of the most important elements of what has taken me into the process I have been involved in through the last two decades." Benoit Lachambre, Choreographer, Teacher, former Skura company member, Montreal
http://opensourceforms.com
http://www.stephanieskura.com 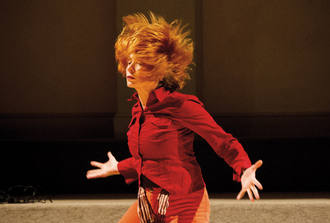