In this process manipulation is put as the major choreographic tool to create movement language. The manipulation is established between choreographer and performer.The audience is a witness to the relations between the established roles of “the choreographer” and “the performer”, looking at their different interpretative modes as part of the process. More precisely the choreographer in the role of the one that gives the task and the performer the one that executes it. The work in process will eventually lead to defining new performance aspects of the choreographic tools in relation to the dance itself as an independent integral form, existing in the same space.

The collaboration between Lokomotiva Skopje and the international artistic network APAP in the frame of the Advancing Performing Arts Project enabled support of six international residencies of Macedonian authors to work on development of new contemporary dance productions.TECHNIQUES OF MOVEMENT MANIPULATION by Iskra Shukarova is supported with the residency in Berlin 22.4-30.04.2015 at Tanzfabrik Studio in Uferstudios. Her work TECHNIQUES OF MOVEMENT MANIPULATION as a work in process has been presented on the festival Locomotion 2014. The residency in Berlin is supported by Tanzfabrik Berlin, APAP and EU Culture Programme (Education and Culture).


Followed by the presentation of the Macedonian Contemporary Dance Scene
Iskra Shukarova has been an active player in the field of contemporary dance in Macedonia, the Balkans and internationally. For the last 20 years, she has been working as choreographer and the last five years as professor at the dance academy as part of the Faculty for Music-UKIM in Skopje.As part of the presentation she will present her project Robolero which was performed last year in Sofia-Bulgaria. The performers in the project Valentin Dimanovski (composer), Viktorija Ilioska (performer) and Elena Risteska (performer) will take an active part in the discussion.

The project has been supported by the Ministry of Culture of Republic of Macedonia. 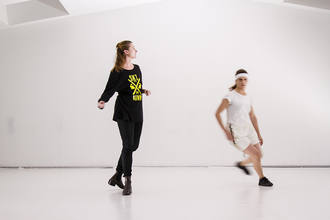