In the frame of Capturing Dance

Capturing Dance" examines the productive fluid relationship between choreography / performance and documentation. Usually ontological requirements of authenticity are opposed to pragmatic demands. Rather than this, the symposium examines the artistic status of performance and documentation. From this perspective, properties that are often attributed to the document, such as "subordinate", "reductive" or "arbitrary" have to be re-examined. If one accepts that choreography and documentation are both artefacts each with its own authorial and medium-specific characteristics, then the question would be, what strategies allow a non-hierarchical relationship - a relationship that allows this supposed opposition to be overcome. Techniques from visual art are especially informative in this context where exhibitions with performative themes treat document and performance in a complimentary way. The symposium invites curators, artists and academics to examine the productive relationships between event and trace, authenticity and historicity, creation and dissemination.

The working language will be English

Biographies of the lecturers

Philip Auslander is a Professor in the School of Literature, Media, and Communication of the Georgia Institute of Technology (Atlanta, Georgia, USA). He holds the Ph.D. in Theatre from Cornell University. At Georgia Tech, Prof. Auslander teaches primarily in the areas of Performance Studies, Media Studies, and Popular Music. He has published five books, including Presence and Resistance: Postmodernism and Cultural Politics in Contemporary American Performance (University of Michigan Press, 1992), From Acting to Performance: Essays in Modernism and Postmodernism (Routledge, 1997), and Liveness: Performance in a Mediatized Culture (Routledge, 1999). He received the prestigious Callaway Prize for the Best Book in Theatre or Drama for Liveness. Prof. Auslander is the editor of Performance: Critical Concepts, a reference collection of 89 essays in four volumes published by Routledge in 2003 and, with Carrie Sandahl, co-editor of Bodies in Commotion: Performance and Disability (University of Michigan Press, 2005). Prof. Auslander’s most recently published books are Performing Glam Rock: Gender and Theatricality in Popular Music (2006), also for the University of Michigan Press, and a second, updated and expanded edition of Liveness published by Routledge in 2008. He is currently working on Reactivations: Essays on Performance and Its Documentation, under contract to the University of Michigan Press. In addition to his scholarly work on performance and music, Prof. Auslander has written art criticism for ArtForum and other publications and regularly contributes essays to exhibition catalogs for museums in Europe and North America. He is the founding editor of The Art Section: An Online Journal of Art and Cultural Commentary, published online ten times a year at www.theartsection.com. He is also a working screen actor.

Christina Ciupke is a performer and choreographer based in Berlin. In my artistic practice I develops projects in collaboration with artists from dance and other disciplines. Within this frame I investigate the correlation and area of conflict between the notions of ”projection, retrospection and speculation” focusing on performative moments in a broader context. I maintain ongoing collaborations with film-maker Lucy Cash, composer Boris Hauf, visual artist Lars Ø Ramberg, choreographer Nik Haffner and Mart Kangro and dramturge Igor Dobricic. From 2003 to 2004 Christina Ciupke is guest artist at the Center for Art and Media (ZKM) in Karlsruhe. In 2013 she receives her M.A. in Choreography from the Amsterdam School of the Arts. 2013- 14 she develop a project with choreographer Anna Till in the frame of ”Tanzfonds Erbe”. Her work e.g. kannst du mich umdrehen (2011) wait and see (2012), undo, redo and repeat (2014) tour internationally. www.christinaciupke.com

Barbara Clausen is a curator and professor for performance history and theory in the art history department at the University of Québec in Montréal (UQAM). Since 2000 she has written extensively on the documentation of performance art (After the Act: The (Re)presentation of Performance Art, 2006) and performative curatorial practices. Since 2000 she has curated numerous exhibitions and performance series in Europe as well as North America, including the series After the Act, Wieder und Wider: Performative Appropriations in Dance and Visual Arts, and Push and Pull (2005-2011) at the Museum of Modern art (MUMOK) in Vienna and TATE Modern in London. Her most recent projects are the first retrospective of Babette Mangolte (2013) at VOX centre d’image contemporaine and the exhibition and performance series STAGE SET STAGE On Identity and Institutionalism (2014) at SBC Gallery in Montréal. She is currently working on the first Canadian retrospective of the pioneering performance artist, Joan Jonas, at the DHC / ART foundation in Montréal to open in April 2016. https://histoiredelart.uqam.ca/personnel/professeurs/16-professeurs/35-professeurs-barbara-clausen.html

Phil Collins is a video and installation artist who, through a close engagement with his subjects, examines the representation and reality of their social and political situations. He is Professor of Video Art at the Academy of Media Arts Cologne. Recent solo exhibitions include In Every Dream Home a Heartache, Museum Ludwig, Cologne; British Film Institute, London; and Dallas Museum of Art. His work has also been included in numerous group exhibitions at institutions such as Museum of Modern Art/New York; Museo Nacional Centro de Arte Reina Sofia/Madrid and Van Abbemuseum/Eindhoven. Collins received Paul Hamlyn Award for Visual Arts in 2001, and was nominated for Artes Mundi Prize in 2012 and Turner Prize in 2006. He has completed a number of international residencies, including DAAD Berliner Künstlerprogramm/Berlin and PS1 Contemporary Art Center/New York. His works are held in public collections such as, amongst others, Tate Gallery/London; MOMA / New York; Solomon R. Ans Guggenheim Museum/New York.

Franz Anton Cramer conducts the research project “Records and Representations. Media and constitutive systems in archiving performance-based art” at the Inter-University Centre for Dance (HZT) Berlin. Between 2007 and 2013 he was a fellow at the CollÈge international de philosophie in Paris. He has collaborated with the Leipzig Dance Archives, the Centre national de la danse and the Bibliothèque-Musée de l’Opéra de Paris in a project investigating dance in the 1930s and 40s. Together with Barbara Büscher, he is co-editor of the special-interest magazine ›MAP Media–Archive–Performance‹ (www.perfomap.de).

Hannah Doerr works as a film maker and as a video artist for theatre. Started off with own video projects at P14 the young theatre group at the Volksbühne Berlin. After that assistant of i.a. Kathrin Krottenthaler (for C. Schlingensief) and Stefan Bischoff (for S. Baumgarten); director's assistant to Frank Castorf. Studied "Experimental Photography" with Josephine Pryde at the UDK Berlin (2010-2012) and "Film" at the KHM (2012-2015). Own video works were shown i.a. HAU 1 Berlin, Radialsystem Berlin, Oper Bonn, Maxim-Gorki Theater. Curator of the "Theatralfilm-Festival" in Cologne.

Susanne Foellmer works as professor at the Theater Studies Department of the Freie Universitaet Berlin. Her research focuses on contemporary performing arts with respect to theories of aesthetics and corporeality as well as dance and performance in the Weimar era. Further research fields are dance in connection to media and visual arts. From 2014 she has been directing the research project “On Remnants and Vestiges. Strategies of Remaining in the Performing Arts” (DFG/ German Research Foundation). She has published largely on aesthetical theory and history in dance, e.g. “Valeska Gert. Fragmente einer Avantgardistin in Tanz und Schauspiel der 1920er Jahre” (Valeska Gert. Fragments of a Vanguard Dancer and Actress in the 1920s, Bielefeld, 2006) and “Am Rand der Körper. Inventuren des Unabgeschlossenen im zeitgenössischen Tanz” (On the Bodies’ Edge. Inventories of the Unfinished in Contemporary Dance, Bielefeld, 2009), as well as most recently “Re-Cyclings. Shifting Time, Changing Genre in the Moving Museum”, in: Dance Research Journal, Vol. 46/3, 2014). She also has been working as a dramaturge for Tanzcompagnie Rubato, Isabelle Schad, and Jeremy Wade among others.

Barbara Formis (PhD in Philosophy, University Paris 1) is Senior Lecturer in Aesthetics and the Philosophy of Art in the Department of Fine Arts of the University Paris 1, Panthéon-Sorbonne. She works in the interdisciplinary field between philosophy and performance. Mainly influenced by pragmatism, her research explores the possibilities of a philosophy of the body with a particular focus on live art and its relationship to social phenomena and life-practices. She is a permanent member of the Institute A.C.T.E. Arts Créations Théories Esthétiques, UMR 8218, University Paris1-Panthéon Sorbonne and C.N.R.S. National Center for Scientific Research. She is the founder and co-director with Dr. Mélanie Perrier (University Lecturer and choreographer) of the Laboratoire du Geste (Gesture Laboratory), a research collective working in the area of performance art.

After studying anthropology from 1990 to 2000 Sigrid Gareis built up the departments of performing arts and international cultural work at Siemens Arts Program in Munich. She was co-founder of dance and theater festivals in Moscow,  Munich, Nuremberg  and Greifswald. From 2000 to 2009 she was founding director of Tanzquartier Wien and from 2011 to 2014 founding director of Academy of the Art of the World in Cologne. As curator and dramaturge she works for venues such as Haus der Kulturen der Welt, Wiener Festwochen, PACT Zollverein or  Philharmonie Köln. She is teaching and lecturing on curating contemporary dance and theatre at various European Universites and Highschools. She is member of numerous juries (e.g., expert for the Culture Programme of the European Commission, Hauptstadtkulturfond, Allianz Kulturstiftung, NRW Kunststiftung).Various book publications.

Boyan Manchev is a philosopher, Professor at the New Bulgarian University (Sofia) and guest Professor at the HZT Berlin and at the Sofia University. He is also former Director of Program and Vice-President of the Collège International de Philosophie in Paris. His actual research, which proposes the perspective of a radical materialism, is focused on the fields of ontology, philosophy of art and political philosophy. Manchev has participated as theorist, dramaturge or performer in theater, contemporary dance and visual arts projects. He curated the exhibition Out of Time at the Sofia City Art Gallery (2011). Among his last books are Logic of the Political (Sofia: Critique&Humanism, 2012), Miracolo (Milano: Lanfranchi, 2011), L’altération du monde: Pour une esthétique radicale (Paris: Lignes, 2009); La Métamorphose et l'Instant – Désorganisation de la vie (Paris: La Phocide, 2009). His book The Body-Metamorphosis (2007), dealing with contemporary art, performance and dance, proposed the perspective of transformationist materialism.

Babette Mangolte (US born in France) is an experimental filmmaker and photographer who is know internationally and lives in New York. Her recent films are of Trisha Brown’s choreography Roof Piece on the High Line (2011 / 2012) and Staging Lateral Pass (1985/2013), Steve Paxton at DIA (2014) and I, Nous, I or Eye, us (2014). Her film Edward Krasiński’s Studio (shot in Warsaw 2011) was shown at Berlinale 2013. Her 2 films from 2014 will be shown in Venice in June 2015. She also works with installations creating architectural spaces exploring different modes of interactivity for the spectators: in 2013 she did TOUCHING III in Inhotim, Belo Horizonte, MG Brazil and another installation about Yvonne Rainer at the Whitney Museum in Fall 2013. She is currently editing the film she shot in April 2015 at WIELS of Anne Teresa de Keersmaeker’s Work/Travail/Arbeid For further details check: www.babettemangolte.org

Eric Padraic Morrill (Berlin/Oakland): In 2012 Eric Morrill completed a Ph.D. in Visual Studies on Allan Kaprow’s Happenings and Environments at the University of California, Irvine, following a Masters in Critical and Curatorial Studies at the Université Rennes II in Brittany. He is currently a Fulbright Fellow in Germany. His research interests include the history of experimental art and artistic ideals, photography, performed reenactments and critical theory.

After studying medicine Ludger Orlok was educated in contemporary dance. He worked at various theaters as a dancer, choreographer and actor among others with Peter Zadek, Companie C. de la B., Lynda Gaudreau and Katja Wachter. Visits to New York and Italy, as well as a professor at the Korean National University of Arts in Seoul for contemporary danvce. Since 2000 he is part of the team at Tanzfabrik Berlin as a project manager, since 2007 as a board and since 2008 as the artistic manager. He responsible and curator among others for the European network APAP (Avancing Performing Arts Project) and the residency program and festivals “Open Spaces” and “Tanznacht Berlin”. Orlok was member at Tanztendenz in Munich board member of ZTBerlin e.V. He developed international projects with artists such as "Cross Currens" (Berlin / Johannesburg), In Residence (a community project by Jo Parkes in Berlin) and worked for the Hanguk Performing Arts Center in Seoul, Goethe-Institute, Daimler Benz Stiftung and the International Festival Movimentos as a consultant. 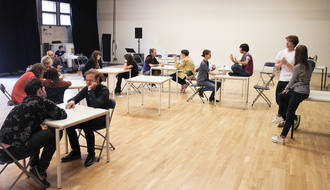