In the frame of Tanznacht-Forum 2015

John The Houseband is a project born in Amsterdam as a musical assembly of performers and choreographers from Sweden, Iceland, Belgium,Spain and Germany. As a collaborative changing body with six limps, John is inspired by the particular ability of live music to affect an audience in a very primal way. John is a band, which is not a band in normal terms, but an art project, an investigation of life and liveness. Their shows blur the boundaries between concert and performance, professionalism and amateurism, skill and dedication. In 2015 they imprinted their liveness on their debut Album. It’s name is "Anthology"! And you can take it home with you.

In this summer project John the Houseband is working in a constellation of four. They are looking forward to share their practice, little findings and unconditional searchings in making songs and sounds and to support and mesh with the discussion round of VISIONÄRER WIDERSTEIT. 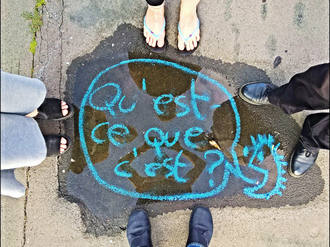