Do strategies exist to prevent conflicts from escalating? How do we dissolve tensions? How do we remove violence from aggression? Felix Ott and Dmitry Paranushkin investigate the Russian military martial arts system and explore training methods used in the conduct of war. To do this they use movement principles that have been tried and tested in genuine war and battle situations. Thus they take the idea of war back to its source: away from destruction and towards adaptability. The conduct of war becomes a dance practice and dance is integrated into war scenarios. 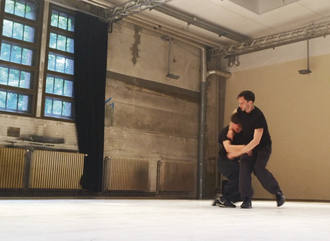