This project is dedicated to investigate how the processes of indexicality, interpellation and focalization are applied to the ways a demonstrator manages his relationship to himself, to his own language, to his own state and to his audience. A demonstrator, as defined by Bertolt Brecht, is someone that reveals a witnessed situation by telling how it happened while showing how it happened, he is always transferring himself in-between two states, the one that demonstrates and the subject of demonstration. Here, we define two self-referential spaces between the demonstrator and himself, and him and the audience. In these spaces, the demonstrator is working with gestures and utterances as signs and relational markers that defines the organization of the lived abstractions that are being performed, showed and pointed to the audience. How are they are being arrested and captured, folded together in complicity, hailed and address are questions and processes that this project investigates through Ajax’s Story from Sophocles. 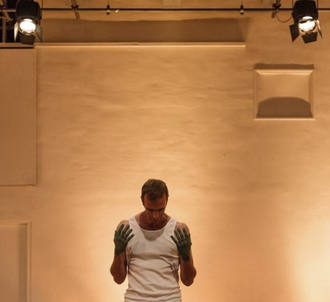