A talk and a practice

The Underscore is a long-form contact/improvisation/jamming/composition score that Nancy has been developing since the early 1990s as a framework for dance improvisation research and practice. It guides dancers through a series of “changing states”—from solo relaxation and sensitizing to gravity and support, through warm up, group circulation and interaction, contact improvisation (CI) engagements, opening out into full group improvisation, and back to rest and reflection. The Underscore is a vehicle for integrating CI into a broader arena of improvisational dance practice, for developing greater freedom moving in spherical space, and for integrating kinesthetic and composi-tional concerns while improvising. The four hours will include periods of small, quiet internal activity and other times of higher energy and interactive dancing. The 20+ phases of the score—each with a name and a graphic symbol—create a general map for the dancers. Within that frame, they are free to create their own movements, dynamics, and relationships—with themselves, each other, the group, the music, and the environment. There will be a 2 hour Underscore talk-through on Saturday given by Nancy. The talk-thru is required for those who haven’t been to a detailed Underscore talk-thru before. It will provide some background and outline the structure in detail, to be followed on Sunday by the physical practice itself, facilitated by Nancy, with live music improvised/composed by Nancy’s longtime collaborator, musician Mike Vargas.

For the past 15 years, a Global Underscore has been occurring near the summer solstice. Conceived by French dancer Claire Filmon, the Global Underscore Solstice is an annual event during which dancers at many sites around the world practice the Underscore simultaneously. Our Berlin Underscore will be one of the sites in the 2016 Global Underscore (coordinated by UnderscoreNYC, globalunderscore.blogspot.com).

Also see events Solo Piano Salon and On Collaboration on 28.6.2016

Nancy Stark Smith first trained as an athlete and gymnast, leading her to study and perform modern and postmodern dance, greatly influenced by the Judson Dance Theater breakthroughs of the 1960s in New York City. She danced in the first performances of contact improvisation in 1972 with Steve Paxton and others and has since been central to its development as dancer, teacher, performer, writer/publisher, and organizer. She has traveled extensively throughout the world teaching and performing contact and other improvised dance work with Paxton and many other favorite dance partners and performance makers, including Ray Chung, Julyen Hamilton, Peter Bingham, Andrew Harwood, Karen Nelson, and musician Mike Vargas. She co-founded Contact Quarterly, an international dance journal in 1975 which she continues to co-edit and produce along with other dance literature. Her work is featured in several books and films, and she has been developing the Underscore, a long-form dance improvisation structure, since 1990. Her first book, Caught Falling: The Confluence of Contact Improvisation, Nancy Stark Smith, and Other Moving Ideas, came out in 2008. She lives in western Massachusetts. www.nancystarksmith.com

Mike Vargas began studying music in 1959. He started specializing in music for dance in 1978. He works as a freelance composer across the USA and internationally performing, teaching, recording, and improvising. For the past 16 years, he has been working around the world with Nancy Stark Smith. He teaches on the faculty of the Smith College dance department. He has released 9 CDs of his music. www.mikevargas.net 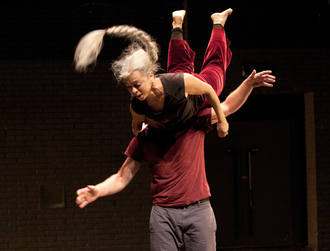 Level: Previous experience with contact improvisation and attendance at the Underscore talk-through are required for participation in this Underscore practice.