The three-part project "becoming undone" by WILHELM GROENER – Günther Wilhelm & Mariola Groener – deals with evolutionary modes of openness. The eponymous term is borrowed from Elizabeth Grosz` writing of the same title. She depicts in it an extensive understanding of matter, nature, biology, time and becoming.
The first part of the cycle, "becoming undone - PART I", was shown at Kunstquartier Bethanien, Studio 1 (Chapel), 30 August - 6 September, 2015 as a hybrid between performance and exhibition. 2 bodies and 2.000 ping-pong balls in constant exploration of the relationships amongst and between them. A view from the gallery provided varying perspectives on a constantly changing situation that probes experimental arrangements of space, sound, body and things. The spectator had a choice: observing the developing performance in full length over the course of three hours, attending an excerpt or stopping by several times, on different days. 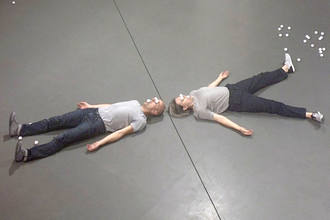