"Time to Meet" is a series of open rehearsals and discussions, a meeting place for exchange and feedback on artistic processes, this time with the artist Begüm Erciyas.

“Voicing Pieces” proposes to regard the act of speaking while simultaneously listening to one’s own voice, as a performance. One’s own voice becomes the site of the event. One’s own voice becomes a spectacle, a fascination or a surprise. Isn’t the own voice always inauthentic and uncanny? As the audience listens to their own voice in the frame of a small-size-theater-device, they experience that they have the power to act through their voice, but, more importantly, that their voice acts through them. By creating a categorical and temporal shortcut between one’s own physical action and its perception, and, by undermining the binary differences between active and passive, performer and audience, "Voicing Pieces" proposes a fragmented model of subjectivity, as well as a particular means of participation. It is the “acting" that counts, not the “acting along”.

by Begüm Erciyas and Matthias Meppelink 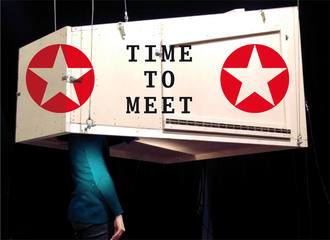