Rewriting Distance is an interdisciplinary, improvised performance practice developed by Canadian choreographer Lin Snelling and Belgian dance dramaturg Guy Cools. It explores "story telling" through dance and movement, spoken word and writing. The participants (which can come from different disciplines) are invited to ask their own questions inside the Rewriting Distance form. We have discovered, and keep discovering, that Rewriting Distance allows for questions, problems, solutions and re-invention as it asks participants to move, speak and write to collectively and individually further the telling of the physical/verbal/and written stories at hand. The original form has three roles: A performer, a witness seated in a chair, and an audience seated behind the witness chair. The practice begins as the performer in an open space with a table and paper for drawing/writing/sculpture-making begins to dance, speak or write. The witness can join the performer at any point they choose, and the performer can leave the space at any point they choose. The audience moves into the witness chair when it is unoccupied and the event unravels in this manner; as each participant moves through the various roles of performer, witness and audience. The table with paper and pen creates an island inside the open space where people are free to write/draw/read/sculpt. www.rewritingdistance.com

Guy Cools is a dance dramaturg. Recent positions include Associate Professor at the research institute Arts in Society in Tilburg, and Guest Professor at Ghent University. He has worked as a dance critic and curator and as a production dramaturg, with amongst others Koen Augustijnen (BE), Sidi Larbi Cherkaoui (BE), Danièle Desnoyers (CA), Lia Haraki (CY), Akram Khan (UK), Arno Schuitemaker (NL), and Stephanie Thiersch (DE). His most recent publications include The Ethics of Art: ecological turns in the performing arts (2014); Body:Language (2012), and In-between Dance Cultures: on the migratory artistic identity of Sidi Larbi Cherkaoui and Akram Khan (2015).

Lin Snelling’s performance, writing and teaching is based in the qualities improvisation can offer as it applies to dance, theatre, and somatic practice. She toured the world extensively as a performer with Carbone 14 and worked with many improvisation ensembles. As an Associate Professor at the University of Alberta she is presently teaching dance, experiential anatomy and composition. Her most recent dance collaborations include Performing Book with visual artist Shelagh Keeley at MoMA (New York), the Power Plant (Toronto) and Vancouver Art Gallery (2014-15). She works with choreographer Tedi Tafel and was part of Every Day, Life World and the Calendar Project in Montreal. (104 words) 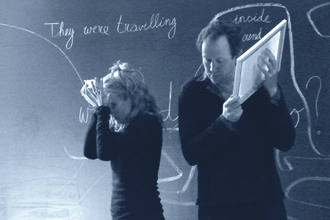