“Swimming on my back is how I exercise outdoors, thus the sky has become a body of material to notice, especially when there are no clouds, as is often the case where I live. Fairly recently, while I was backstroking, a field of nuanced atmospheric activity came into focus through my application of the question, “what if I presume I am served by how I see?” Was I seeing things because of the question, or was it an actual visible condition I never noticed before? After a few days I associated what I was seeing as a continuation of the sky, and I have been relying on that now pervasive reality to promote a sense of interconnectedness with all there is when I dance.” We will experiment and co-choreograph with this material during the workshop.

Deborah Hay is one of the most radical and influential post-modern artists, who still expands our perception of dance. She dances, choreographs, writes, directs, and coaches. She has an Honorary Doctor of the Arts Degree from the Theatre Academy Helsinki and is an inaugural recipient of a 2012 Doris Duke Performing Artists Award. Her 4th book, Using the Sky is published by Routledge Books and a documentary film, Turn Your F^*king Head, about Hay’s Solo Performance Commissioning Project is now available from Routledge Books. www.deborahhay.com 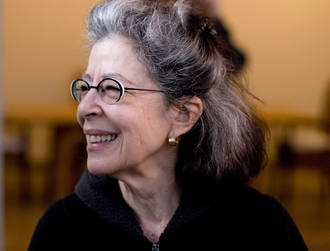