The Vanishing Meeting
This performance results from the gradual erosion of a group practice into a solo practice. In a room, a person talks about things that may never take place. Utterances addressed both to no one and to everyone inquire into the power of imagination. These suggestions take the audience on a journey that begins in the very room they are in, before drifting away into a land of science fiction.

Fourteen Functional Failures
fourteen functional failures is a series of failures executed by Lee Meir. The project practices questions regarding rhythm and physical time within complex relations between language, body, voice, and sound. failures n#7 & n#9 will be shown at Tanzfabrik. failure n#7 focuses on the gap created between the body, anchored to the uncertainty of now, and the privilege of displacement from the now, which language enables. failure n#9 activates a multiplicity of speeches and sound-actions in rigid momentary rhythmic structures. failures n#4, n#5, n#7 and n#9 have been presented at Nah Dran, ada Studio, Berlin / Vulva Club, ausland, Berlin / Die Lust am Text, Tanzquartier Wien. 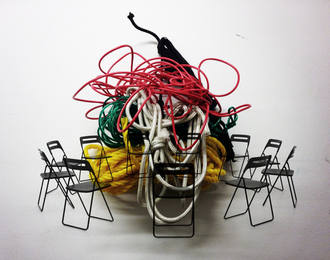