With the support of the Einstiegsförderung 2016 and Tanzfabrik Berlin Ixchel Mendoza Hernandez is presenting the first research of the project "Two Identical Mirrored". "Two Identical Mirrored" researches as a laboratory space, to play with the fine borders between perception, memory and imagination. Investigating how the audience is forced to make chains of associations and possible story configurations of a disjoint proposition, in an atemporal fictional “space”. The choreographic investigation of this piece comes as a cinematic editing process from all the elements being juxtaposed. All together it functions as a montage, working with the cinematographic and personal memory of the spectator. 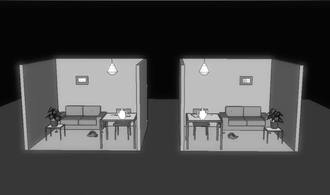