The performance is based on the glamorous cinematic melodrama, “Imitation of Life” by Douglas Sirk, and focuses on the relationships between mothers and daughters, black and white women, and men and career-oriented women. Hegenscheidt radically liberates and resamples the dialogue and body language of the film. She brings together narrative and choreography to create continuously shifting spatial and rhythmic arrangements, which offer up new contexts and interpretations. 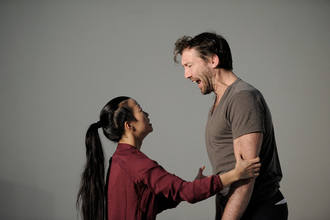