“M.O.N.D” (Meditation on Non Destruction) is a collective research process on the notion of conflict and parallel reality. We focus on the principles of combat disciplines and techniques for survival tested during real combat and war situations and specifically designed for endurance, effectivity, dissolving tension and redirecting aggression. The live performance is a choreographic situation that displays a series of physical, somatic and psychic encounters allowing tension to be channelled into performative systems that produce the effervescence of an never ending oscillatory game of self-regeneration. In the space of the theater we are launching a myth into the future where the audience is invited to activate the parallel meanings of asimulated reality composed by an fragmented milieu continuous physicalities, nonlinear dynamics and aesthetics of confrontation.

30.10. und 31.10. 2016 "The resonance room" or “This piece is still happening”
An after talk within the context of the project M.O.N.D.
Supported by mapping dance berlin
"The Resonance room" is an invitation to the audience to enter the stage, to lay down in darkness for 45 minutes without moderation to anonymously start talking from an aspect or an element they would like to continue the piece from. It can be a particular moment of the piece, a movement, a sound, an idea, a part of the concept, an object, an atmosphere, anything. It is a collective exercise to expand the horizon of meaning of the piece. We all together make sense and produce meaning: because we talk, the piece continues happening. 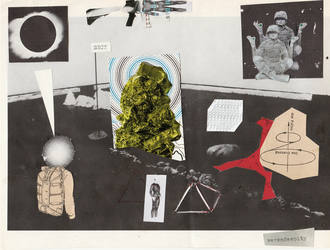