The choreographer Reza Mirabi, the visual artist Madison Bycroft, and the musician Alex Linton meet for an interdisciplinary encounter to look closely at the relation between several rituals. The theatre modality here frames a filmshoot and the filmshoot itself frames a techno shamanic trance. Rather than putting the spotlights on theses rituals, the relationship between them is taking center stage. The influence and confrontation of one ritual by the other is inevitable and also the potential of becoming one’s opposite. Focussing on the oscillation between engagement with eternity and immediacy, and the interchangeability of these states. What happens to a frame when eternity arises within it? The ritual becomes #spectacle and the spectacle becomes #ritual. 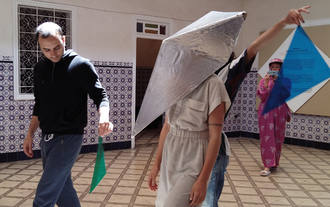