Martin brings a number of subjects to this workshop, which he is simultaneously cultivating in his own research as a teacher, student and performer: Body Work (strength, mobility, coordination), Technique (a procedure used to accomplish a specific activity or task), Sense of Dancing (dancing with precision, chosing relationship to the music), Creativity and Freedom, Performance, Enjoyment and Work Ethics (referring to your own discipline and approach to dance as an art form). He aims for these subjects to nourish each other and coexist at the same time. Through his teaching wants to inspire the dancers to build up their own dance method using their knowledge, observation and intuition.

Martin Kilvady (Slovakia/Belgium) did most of his training in Slovakia, including a program for teacher education in contemporary dance at the Comenius University in Bratislava, and the School of Music and Dramatic Arts where he received his "Master of Arts". During the 1990s he danced for Torzo Ballet Company in Bratislava, Slovak National Theatre and Magyar Fesztival Ballet Budapest. 1997 he became a member of Anna Teresa de Keersmaeker's ROSAS dance company. In the 2000s he collaborated a.o. with the choreographer Roberto Olivan, circus company Rital Brocante and since 2003, he has been a member of Thomas Hauert's company ZOO. Since 2007 Martin Kilvady is co-founder and active member of Les SlovaKs Dance Collective. Martin started to teach dance classes in 1991 and since 2001 has been preparing training programs for professional dance companies, guiding open workshops and being a regular teacher in Dance academies. 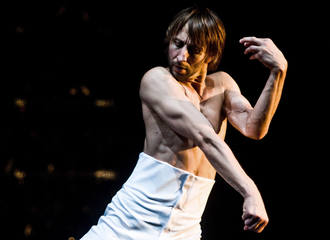