This workshop explores the dialogue between rhythm and the dancing body. It brings together Janos and Francesca’s experiences from the intensive study of the fascinating, surprising, logical and sophisticated West African partnership between music and dance. Aiming to increase our awareness for a more sensitive and accurate interpretation of rhythm and movement, we propose interactions with rhythm in several ways through playful experiments and guided improvisations: dancing on or in opposition to the rhythm, being influenced by or influencing a rhythmical pattern, composing one's own rhythmical movement and enjoying dancing together without losing one's own sense of self or style.

Janos Crecelius is a percussionist, composer and performer. He combines a deep knowledge of West African music and its connections to the dance with an extraordinary musical presence and sensitivity. His talent and his passion are reflected in numerous projects: dance performances, plays, various music formations. As a renowned dance accompanist, he has worked for Koffi Koko, Elsa Wolliaston, Tchekpo Dan Agbetou, Seydou Boro, Germaine Acogny and many others. He gives percussion lessons for children and adults in his hometown Berlin as well as in various cities in Europe.

Francesca Pedullà is an independent artist-curator and Axis Syllabus teacher. She graduated in History of Theatre and Performing Arts. She holds a diploma as a professor of African Dance Expression - Centre Artistique 6-éme Parallel - FEIDA Bordeaux, directed by Koffi Koko. Since 1998 she has spent several months out of the year living in Benin, who's rich culture has been a profound artistic inspiration. Since 2005, she develops artistic works and cultural cooperation projects as choreographer and artistic director in both Europe and Benin. Her latest works were presented at the Institute Français de Cotonou (Benin), FITHEB (Benin), Teatro della Tosse (Genoa), Teatro dell' Archivolto (Genoa), TroisC L (Luxembourg), Festival Biennale Passage 012 (Bielefeld), Tanzfabrik Berlin, Haus der Berliner Festspiele (Berlin) a.o. Currently based in Berlin, she choreographs, performs and teaches throughout Europe, the USA, Canada, Israel, Brazil and Benin. www.francescapedulla.org 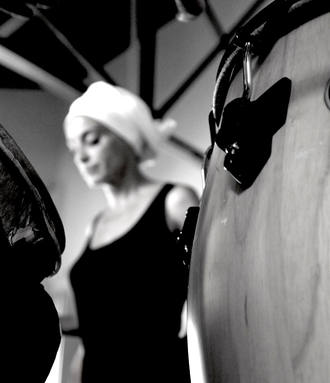