"Ecologies of practice"*
The permanent state of crisis, which we witness today, can't be restored to a previous sense of order, neither through disciplinary / disciplining thought nor through acts of distancing and exclusion. It requires global agency and imagination, which bears with the un-known and takes into account our relational interdependency. It requires radical openness, a speculative attitude, pleasure in engaging with the un-known and un-certain and a willingness to think beyond human-centred catgories and temporal and spatial dimensions.
Classical ecology is the theory of environmental relations, of distribution and movement of energy and matter in a house(hold). Meanwhile the term is used in a broader sense – including the social, the environmental, the intellectual realms. ecologies of practices* experiments with various settings of work and conversation. Silke Bake, Alice Chauchat, Bettina Knaup, Siegmar Zacharias - all working in the field of contemporary performing arts – take their current interests and methodologies as starting point to engage and think with guests from contemporary dance and other disciplines: categories of aesthetics (technology/technic, ethics/practice, form/format, process/product, subject/object/agent) are being explored in their multiple conditionality and relationality.  *borrowed from Isabelle Stengers

Concept 2016/17: Silke Bake, Kuratorin/ Dramaturgue Mentor; Alice Chauchat, Choreographer/Dancer/Teacher; Bettina Knaup, Curator/Autthor; Siegmar Zacharias, Artist/Theoretician
STUDIO 13 was initiated by curators Silke Bake and Jacopo Lanteri in 2015 with the aim to offer a space for exchange about working methods and interests in the field of performing arts. 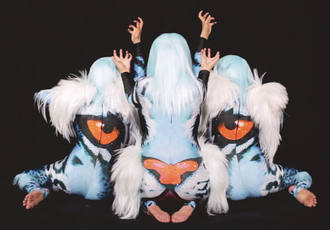