Bettina’s current research and curatorial practice engages with (performance) artists who experiment with waste intimacies – living intimately with, off or even as waste. Contemporary Western waste habits are build on disposability, distance, and denial, however it is increasingly difficult, to remain blind to the presence and agency of waste all around us and – through the flows of toxins, chemicals, plastic particles, metals – also in us. A number of artists and scholars of waste therefore call for closer attention to waste's material specificity, interrelationality and generative power, rather than perpetuating an environmental discourse, which uses waste to stage the destruction of the planet. Such narratives - so their argument - have the tendency of creating withdrawal, paralysis and guilt rather than inspiring urgently needed experimentation with alternative knowledges and modes of living. This evening is dedicated to joint intimacy with waste, inviting artists and a number of videoworks into a joint conversation, contemplating what can't be discarded, ranging from plastics, to placentas to food left overs.

"Ecologies of practice" *
The permanent state of crisis, which we witness today, can't be restored to a previous sense of order, neither through disciplinary / disciplining thought nor through acts of distancing and exclusion. It requires global agency and imagination, which bears with the un-known and takes into account our relational interdependency. It requires radical openness, a speculative attitude, pleasure in engaging with the un-known and un-certain and a willingness to think beyond human-centred catgories and temporal and spatial dimensions.
Classical ecology is the theory of environmental relations, of distribution and movement of energy and matter in a house(hold). Meanwhile the term is used in a broader sense – including the social, the environmental, the intellectual realms. ecologies of practices* experiments with various settings of work and conversation. Silke Bake, Alice Chauchat, Bettina Knaup, Siegmar Zacharias - all working in the field of contemporary performing arts – take their current interests and methodologies as starting point to engage and think with guests from contemporary dance and other disciplines: categories of aesthetics (technology/technic, ethics/practice, form/format, process/product, subject/object/agent) are being explored in their multiple conditionality and relationality.  *borrowed from Isabelle Stengers

Concept 2016/17:  Silke Bake, Kuratorin/ Dramaturgue Mentor; Alice Chauchat, Choreographer/Dancer/Teacher; Bettina Knaup, Curator/Autthor; Siegmar Zacharias, Artist/Theoretician
STUDIO 13 was initiated by curators Silke Bake and Jacopo Lanteri in 2015 with the aim to offer a space for exchange about working methods and interests in the field of performing arts. 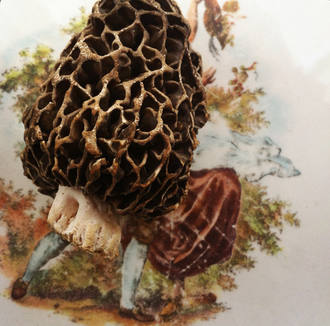