C O R E  M O T I O N is a performance and healing practice, which Daria Faïn has developed over 35 years. It is informed by an acute research on architecture, neuroscience, linguistics, psychology and energetic states and is the result of a deep exploration of cultural dynamics between between her European cultural background, her Asian studies and the multicultural landscape of artists in North and South America. The first part, Inner Structure focuses on the alignment of the body and its relation to gravity. These principles are put into practice by means of a system of exercises using Qigong principles and forms. The second part unfolds with Contemplative Action, an improvisation/composition practice using the Chinese 5 Element Theory and other cognitive principles to explore individually and collectively the correlation between the organs, senses, emotions, and the propriety of the material space that surrounds us.

Daria Faïn (USA/F) was born in the South of France and has lived in Brooklyn since 1996. Faïn has developed C O R E M O T I O N, a unique movement and performance methodology based on 35 years of studies and research on Asian philosophy of the body. She is a certified Qigong teacher from Mantak Chia's Universal Healing Tao since 2001 and a certified Alexander Technique™ teacher since 1990. She has intensively studied Tai Chi, Martial Arts, Internal Energy Activation, Mental Energetics and the 5 Element Theory with master teachers Karfung Wu, Fransicco Albuquerque, Dr. Jan, Frank Allen and Laura Bernard. In 2008 she is co-founded a performing group called "The Commons Choir", with poet Robert Kocik in 2009. Her work has been presented and commissioned by BRIC Arts Media, River to River Festival, New York Live Arts, Gibney Dance, Danspace Project, Dance Theater Workshop, Dance New Amsterdam among others. In the U.S. Faïn has taught at New York University, Sarah Lawrence, Trisha Brown Studio, Rutgers University, Harvard University, Tulane University and Cooper Union. www.dariafain.net 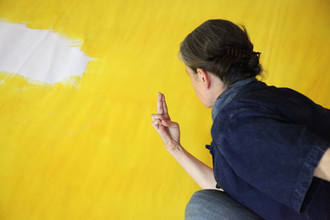