This workshop unfolds around the idea of movement in a particular time and space, a living space. It is an invitation to a deep exploration of an authentic consciousness of the connection between possible and potential bodies. Participants will be invited to question and reflect upon existence, and how they perceive empathetic movement in the process of choreographic creation. Exploring notions of Somatics, as well as the distribution of weight and gravitational forces, Benoît Lachambre offers the opportunity to re-connect with a choreography of feeling, of the immutable.

Benoît Lachambre (CAN) is active in the dance milieu since the 1970s and was introduced to Releasing in 1985. He is the founder of the artistic platform Par B.L.eux. His career as a choreographer, performer and educator is based on the connection between Somatics and artistic creation. Benoît Lachambre has been teaching for more than 25 years. For Par B.L.eux, he has developed an educational program that proposes a deep exploration of the hyper-awakening of the senses. At the heart of his approach is a genuine drive to draw upon many notions of the body. 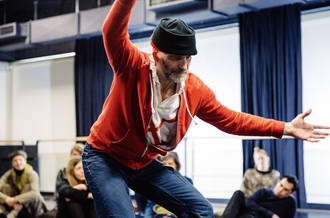