The recently grounded DANCE ON ENSEMBLE would like to share the threads of creative process, collaboration and performance in a structured improvisational evening that use the 4 fully rendered first works and the 2 works that are currently being created, as points of content and departure. The presentation hopes to encapsulate the ideas that went into the creation of the body of work DANCE ON has been invested in creating so far. “Cameo” appearances from some of the collaborators: Martin Nachbar, Kat Válastur, Jan Martens and Rabih Mroué will help to demonstrate their individual artistic intent in the collaborations as well as perhaps strike new impulses in the work. An element that allows the audience to influence the environment at a certain point in the evening will be an added component to inform and transform. 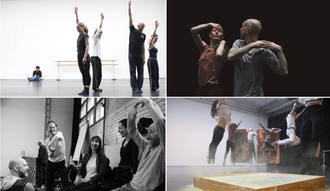