“Dialogue in presence, we need the consciousness of our being having a sense of root and roof. In the evolution of art creation, the being is the dance of life.“ Prapto
“Embodied moving seeing sounding, moment by moment landing in the body, daring for the unusual, unknown to emerge.” Beate

Listening, tuning in to feel resonance, finding a common ground. Being in the body, melting the mind, deepening awareness. This work gives guidance to perceive the world through movement rather than stasis and how the changing moment is constantly re-creating itself. We follow our own experience on all levels.

Beate Stühm is a Movement/Dance teacher, artist and embodied researcher. She graduated from Anna Halprins San Francisco Dancers Workshop/Tamalpa Institute; practised intensively in Java and Europe with Prapto, she is acknowledged as an Amerta Movement Art Teacher; she trained as a Sumarah Meditation guide and is a Somatic Experiencing ® Practitioner. She made video documen- tations “moving movie” of movement works and edited “Impressions”, a Sharing Movement Magazine. She calls her work “Blossoming”, an integration and embodiment of her artistic practice and work.

Suprapto Suryodarmo (Prapto) calls his improvisational movement practice Joged Amerta, which stems from his study of free movement, Vipassana and Javanese Sumarah meditation. He sees his approach as cultivating an attitude towards life. His idea : How to become less identified with my movement in art happenings – stimulated him to create his school Padepokan Lemah Putih in 1986. In 2015 Prapto received an award from the Ministry of Education and Culture of the Republic of Indonesia for “Cultural community that gives a new interpretation in the liberation of the body in movement vitality". Initiated 1986 by Suprapto Suryodarmo in solo it is now expanding into the global community by organising various multi cultural meetings. Prapto teaches and performs in Indonesia, Europe, U.K., Australia, USA, Mexico, Japan, India and the Philippines. 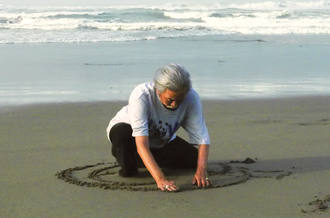