Skinner Releasing Technique (SRT) is an innovative approach to dance and movement training, developed by Joan Skinner. It is designed to ease tension by promoting effortless moving and integrated alignment of the whole self. The teaching strongly draws on guided imagery and hands-on partner studies, supporting an experiential understanding of both the technical and the creative process in movement. It engages many layers that are involved when we dance and create, inside as well as outside. Softening, noticing and allowing are some of the main areas of practice in Skinner Releasing (other than release), that support action into newness. The practice of allowing in SRT encourages listening. This way we can become more available and responsive to our own dance and to what else is taking place. In the workshop, attention is being given to working by yourself, in duet and to dancing within the whole group. We’ll be making connections between technique and making dances in the moment. In both the technical and in the creating, directing and allowing are side by side, as are stillness and action, receptivity and fierceness.

People of diverse physicalities are very welcome. Unfortunately not accessible for wheelchair users.

Lily Kiara is a dance artist and singer/songwriter based in Amsterdam, NL. She has been making performances since 1989. For her new solo project 'Field of Disappearance’, she has been working in Amsterdam, Finland and Indonesia. Other current works are ‘Subtext’ (work title) with Michael Schumacher and ’Dinggedicht’, a trio with dancer Ana Leonor Ladas and Ab Baars (shakuhachi, clarinet). Her piece SAYA IKAN / I AM A FISH, with Michael Moore (clarinet) was nominated for ‘Best touring dance performance in Austin, TX, USA). Other collaborations have been with a.o. Julyen Hamilton, Eva Karczag (dance), Felicity Provan, Michael Vatcher, Wilbert de Joode (music) and Ellen Knops (lights). Poetry and stillness are at the heart of her work. She has trained and worked in European countries, USA, Australia and Indonesia, mainly in Improvisation, Martial Arts and Skinner Releasing Technique. Lily has been teaching workshops since 1996 and is a certified Skinner Releasing teacher since 2001. Lily Kiara has been teaching at independent studios, festivals and art institutions throughout Europe, USA, Australia and Indonesia.  She formed her own band The RIVER and produces cds on her label for music and poetry Sibyl Sings. Since 2015 she tours yearly in the USA. Her latest album ‘Fishing In The Field’ released in 2016 on ZIP Records. www.lilykiara.nl 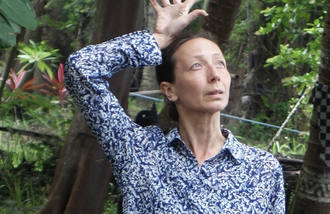