Ted Stoffer will teach a technical workshop that stimulates cardio, co-ordination and creative play to unlock the power of an integrated body, that utilizes the three centers ¬- from pubic bone to navel, heart area and head. Exercises for articulated and consequential isolated movements prepare for the dancing of small sequences. Intermediates will play with these choreographies and tools for their manipulation.

Ted Stoffer (USA/BE) is a Brussels based choreographer, performer, teacher and founder of Aphasia Dance company. His production, Aphasiadisiac, produced by Les Ballets C de la B, was nominated for critic prizes in Belgium and was a co-recipient of the Argos critics prize at the Brighton Festival UK (2008). His work spans genres ranging from contemporary dance, theatre, butoh, audience interactive performances, Tanztheater, educational videos and in 2012 he created an original stage performance inspired by Japanese game shows.Ted has taught for: Rosas, Ultima Vez, Charleroi Danse, Sasha Waltz and Guests, DV8, Carte Blanche, ImpulsTanz, the Venice Biennial, amongst many others. He has led creative workshops in most European countries as well as Japan, Korea, Turkey, and Canada. Over the last six years he has taught regularly in leading acting schools in Germany and has developed a close working relationship with German directrice, Sandra Strunz and award winning Flemish director, Luk Percival. 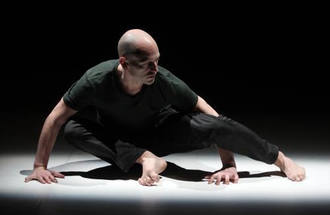