Naming things not only separates them from one another and gives them identity, but also can bring them into being. Motivated by the generation of meaning in the ‘post-truth’ era, Renae Shadler and David Bloom work with language, movement, sound, and energy to invoke their constantly shifting reality. Working only with what is authentically present, the artists examine the intersections of the personal and political.
“Naming it” includes the showing of a performance duet by Shadler called “And She saw that it was good”, and Blooms research for "The Universe Project’', followed by a discussion with the audience into their shared artistic inquiry.

20.7. “Frei-Raum". Audience format after the performance (in English). 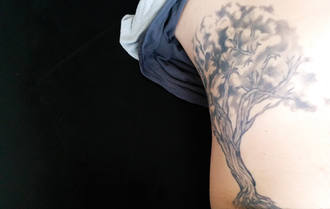