Two gangs, two worlds, which are facing each other, observing each other. They couldn’t be more different. Even though they fight with the same problems: where do I belong? Who am I? What builds my personality?
In a gang it’s either about belonging or being thrown out, it’s about sharing the same values, but also about what it means to be a woman.
You are not alone, in your gang you are a part of something, you are someone! You share style, the same values and visions of the world and you follow the same rules. And if you don’t, you’ll easily get in trouble. Either you are a part of the gang or you are alone again.

The scholars, 14-16 year old girls, from the Max-Beckmann secondary school have dealt with the subject of interpersonal encounters, how it feels to belong somewhere and what it does to you being a woman in this situation. For that matter they explored, analyzed and opposed different rolemodels of femininity from commercials, politics and movies and turned them into movements. We, dear audience, are pleased to invite you to dive into this piece, which in many ways is inspired from the West-Side-Story. 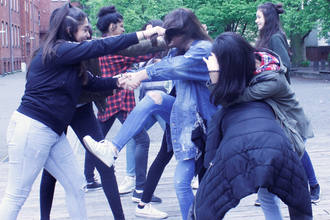