In their spatial choreographies, Moritz Majce and Sandra Man create spaces for audiences in which seeing and hearing become direct physical experiences. Their point of entry searches for something other than the mirror-like opposition of performer and audience. In »Narkosis«, they thematize this narcissistic relationship and place it in a state of suspense: between narcissism as a symptom of the present and the ancient myth of Narcissus and Echo, between gaze and voice, image and body a gliding and drifting unfold which transform self-absorption into self-forgetfulness and lets the auditorium become a cave.

In the frame of the dance campaign „Watch Me Dance“. 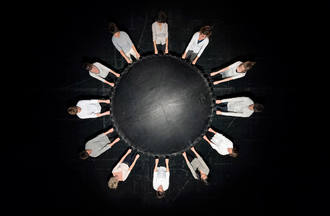