This workshop is for anybody interested in improvising with others using movement and text. We will work alone, in pairs and as a group, practicing moving and using our voices together. We will explore different ways of generating material and relating that material to others, developing skills of listening, noticing and responding in performance. Seke brings all his experience and humor as performer into this workshop. His teaching facilitates ease and confidence in performing and a joyful approach to improvising together.

People of diverse physicalities are very welcome and encouraged to attend this workshop.The studios are unfortunately not accessible for wheelchair users.

Seke Chimutengwende (UK) works in dance as a performer, choreographer and teacher. He trained at London Contemporary Dance School from 2001-2004 and went on to study improvisation extensively with Andrew Morrish, Al Wunder, Sten Rudstrom, Ruth Zaporah, Julyen Hamilton, Kirstie Simson, Rosalind Crisp and John Britton. Seke has performed with acclaimed dance theatre companies such as DV8 Physical Theatre, Lost Dog and Fabulous Beast and in works by Trisha Brown and Tino Sehgal at the Barbican Art Gallery, London and the Tate Modern respectively. For his own company Seke Chimutengwende & Friends he has choreographed four works including The Time Travel Piece for The Place Prize 2012 and King Arthur, which premiered at The Yard Theatre in London, 2015. Since 2016 Seke has collaborated with Alexandrina Hemsley on duet Black Holes which premiered at The Place in June, 2018. His new solo choreography Plastic Soul premiered at The Yard Theatre in January 2019. Seke has performed over 60 improvised solos internationally, performs duet improvisations with Kate Hilder as well as ensemble improvisation with Neat Timothy. Seke has taught a.o. for Independent Dance London, London Contemporary Dance School, Rambert School of Ballet & Contemporary Dance, Central School of Speech & Drama, Goldsmiths University, TripSpace and Greenwich Dance as well as improvisation festivals in Sweden, Germany, Russia, Greece and Malaysia. 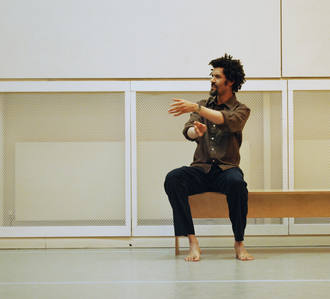