A performance with deliberately frayed edges. The working process is allowed to spill over into the ‘show’ and the messy bits that may have preferred to be discarded are invited in, to tug and heckle and throw light on the pristine heart of the piece. For »Live feed« Rosalind Crisp has invited a core group of four dancers who have many years of experience with her method, and 20 others, familiar with her work, join them on stage. »Live feed« celebrates Crisp's long association with Tanzfabrik and her ongoing engagement with many Berlin-based dancers. 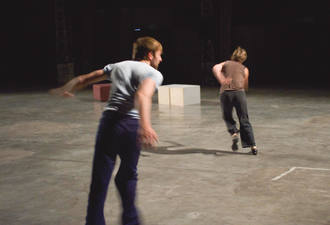