This care thing is critical!!

In the frame of Open Spaces/Sommer Tanz 2018

The following mediated format, hosted by The Battlefield Nurse, will trace Wade’s research as a Performer, Performance Maker, Curator and Teacher from 2011 to the present regarding the paradox’s and potentialities of support and care. Grab some popcorn! The Nurse will highlight key moments from Wade’s “Fountain” solo, 2011 through his latest collaboration titled “Between Sirens” 2018, where theories, practices and choreographic frame works that are critical of care began to steamroll. Notice here the influence of the anti-psychiatric movement in regards to dispossession, the pro’s and cons of togetherness, a dead clown selling death as the only possible livable life and of course the perils of constantly trying to be a better you aka…. subjectivity enhancement!! Yeah, we are fucked!! Don’t worry, this section will make for lots of fun with friends on a Sunday afternoon! Next up, grab a tissue for “Crisis Karaoke” where filming your therapy sessions when having a full-blown panic attack makes for wondrous sing along with public. #exploitingyourself #onecoinforeveryteat #everybodyis
wounded #poorwhiteguy. If you haven’t left yet, The Battlefield Nurse will detail her latest efforts hosting the ever-expanding Future Clinic for Critical Care. FCCC is happening folks and she is going to talk about different conceptions of care as political methodologies, the gritty details of social practice, the labor of producing diverse publics/why that’s crucial and the sheer joy of throwing super diverse parties that are accessible as $%&#!! Finally, once the acid has really kicked in The Battlefield Nurse, timeless custodian known and visible on every war-torn sideline will put everything in a blender called “affective political imagination!” She is a fictional character talking about the messy politics of care with a mic, a moody play list and some material that just might make you laugh cry and dig for some more popcorn cause um its very uncomfortable now. Don’t worry, the nurse will make a potion with everyone’s spit in a gesture of solidarity that will serve as the cement needed to build Future, Future Clinics and it all ends in a circle dance invoking/performing basic gestures of civic and domestic support. Finally, we can all do poppers and have a nice Q+A!!!

Thanks to Tanzfabrik Berlin and Mapping Dance Berlin for their support. 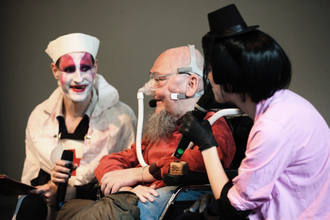