Talk around the Table

»Drifting occurs whenever I do not respect the whole, and whenever, by dint of seeming driven about by language‘s illusions, seductions, and intimidations, like a cork on the waves, I remain motionless, pivoting on the intractable bliss that binds me to the text (to the world).«
Roland Barthes, The Pleasure of the Text

Roland Barthes‘ quote inspires this year‘s Studio 13 series of talks. Starting from Barthes‘ drifting pleasure, we move into the vastness of the Performing Arts. Several talks about topics such as technology, money and corporality will let us explore unexpected and unusual shores and develop visions to open up possible new paths.
The drawing »The Bank of England in Ruins« (by Joseph Gandy, 1830)  becomes the vanishing (or starting) point for the scholar Andrea Binder (University of Cambridge) and Berlin-based artist and architect Bettina Vismann to explore the physical as well as virtual power of money in making politics. In conversation with each other, we question its influence towards our bodies and (its) imagination.
The next talk of the series »Studio 13 - The Drifting Pleasure« takes place on 4th of March, also in the frame of Open Spaces!.

With Andrea Binder, Bettina Vissman | STUDIO 13 was initiated by curators Silke Bake and Jacopo Lanteri in 2015 with the aim to offer a space for exchange about working methods and interests in the field of performing arts. Concept 2018/19: Jacopo Lanteri, Curator/Dramaturg | Production: Tanzfabrik Berlin. 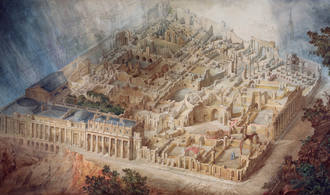