The dancer and choreographer Koffi Kôkô has been known as one of the initiators and most prominent representatives of the modern African dance scene. In this workshop he focuses on the participant‘s relation to her/his own body, personal expression and the symbolism of the gestures used in African dances. Repetition of the dances in correlation with the music will allow for a more holistic, a lived experience of the dance. Koffi Kôkô is a dignitary of the Voodoo religion in his homeland Benin.

Koffi Kôkô (FR/BJ) was born in Benin, West Africa, where he grew up in close contact with the animist religion of his home. In 2004 and 2005 he was curator and together with Johannes Odenthal artistic director of the festival In Transit (HKW, Berlin). With Ismael Ivo he choreographed and danced the play »The Maids« under the direction of Yoshi Oida. In addition to Koffi Kôkôs most important work u. a. »Passage«, »D’une rive à l'autre«, »Terre rougeâtre«, »Ça« and »Les feuilles qui résistent au vent«. He choreographed a.o. at the Kennedy Center in Washington, Barbican Center in London, Tanztheater Verena Weiss, Lucerne. For some time Koffi has been working on the construction of a choreographic center in Benin/Ouidah. 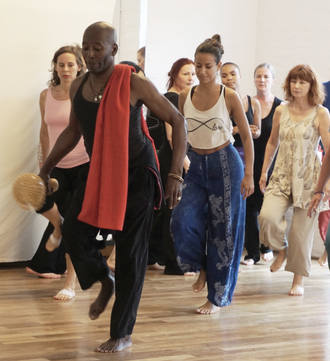