A performance for adults by children

Eva Meyer-Keller and Sybille Müller have carried out intuitive catastrophe research and examined the cultural mediation of climate change since 2006.
Working with different experts – children as fantasy and craft experts, cooks as food preparation experts and scientists – various performances and films have been produced.
As part of the workshop Katastrophenkompositionen (Catastrophe Compositions) during Tanznacht Berlin, children between the ages of 10 and 12 orchestrate a series of catastrophes using simple everyday objects such as matches, sugar cubes, salt, beans and paper. Acting as composers, they create the sound of the disasters they have selected: earthquakes, volcanic eruptions, tidal waves, tornados and melting icebergs.
A text is created from interviewing the children, capturing their visions of what a catastrophe is and how catastrophes are represented in our media. Associated topics like food production, mass migration, changes in environment and how all these things influence our culture and society become a dense network of streams of thought in which the children articulate their visions of what our future looks like. The performance is followed by a screening of the film Von Menschen gemacht. 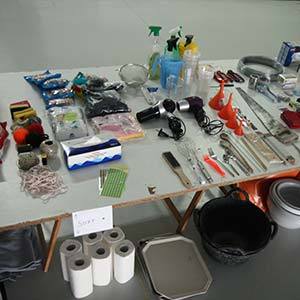