"Hot Bodies - Drive In" is a transdisciplinary performance project around sexual revolutions and “care” as a political tool. Combining the practices of video-art, documentary photography and live club music, it unfolds in 9 chapters or “chants”, the fictional story of the artist’s initiation towards a group of sex-positive activists and practionnists who use sexuality to “heal” (organs, bodies, contexts). Its main materials are photographies and documentary films shot in the lgbtq+ scenes of Berlin, ​​San Francisco and Rome, re-contextualized with live electronic music and visual narrratives (projected video-texts) in the frame of a lo-fi cinema-like hybrid installation with glimpses of utopian science fiction. It is an attempt to highlight the political and poetic aspects of practices such as eco-sex gatherings, sex magic rituals or tantric massages as well as an opportunity to build bridges between the idea of ​​emancipation by sexual joy and a broader idea of ​​social ecology. 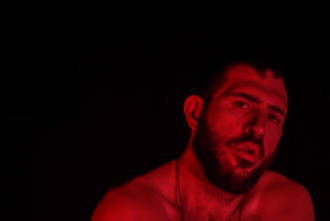