Using the term ‘dance & politics’, Christoph Winkler looks at the clash of state and citizen in times of capitalist crisis. Demonstrations of power impact against demonstrations of protest and generate unique aesthetics of conflict. The scenarios, be they street theatre, contemporary art or arts activism, are eloquent testimonials of a generation that only knows capitalism as a permanent state of crisis. However, as in every ideological demonstration, there are gaps that point to something the protagonists miss. Kettling by the police against sitting demonstrations does not just mean strong against weak because the ‘mime’ of the protests oscillate in their meanings. How and under what circumstances can protests say anything anyway? Winkler searches for answers with humour and earnestness with four dancers and actors. 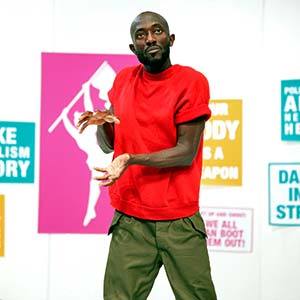