Life and Death of a Melody

A deconstruction of repetitions and loops in movement and sound.

In their third collaboration Christina Ciupke and Boris Hauf continue researching the link between sound and movement. Supported with lighting design by Emma Juliard the piece unfolds from microscopic sound and movement language to complex sculptures. The performance space is a vibrating three-dimensional body of sound, allowing the audience the experience proximity and distance on different levels of perception. In her movement research Christina Ciupke’s interest is drawn to details - such as a small shift of a joint resulting in an involuntary chain reaction and adjustment of other parts of the body. As it is taken by gravity, the swing of an arm is trapped and decelerates. Two-dimensional images, movement sketches and repetition develop into more spacious and dynamic structures. Boris Hauf sets the sound complementary to the movement interacting microscopic loops with elongated, nested phrases. Together they investigate the deconstruction of repetitions and loops after they have been visually and aurally established.

Performance, Music: Christina Ciupke, Boris Hauf | Light Design, Set: Emma Juliard | Production dramaturgy/PR: Barbara Greiner | A Production by Christina Ciupke | Supported by the Berlin Mayor, Department of Culture in the frame of the basic funding 2016 | The re-staging is supported by the Berlin Senat Departmend of Culture and Europe. | Supported by apap – Performing Europe 2020, co-funded by the Creative Europe Programme of the European Union. 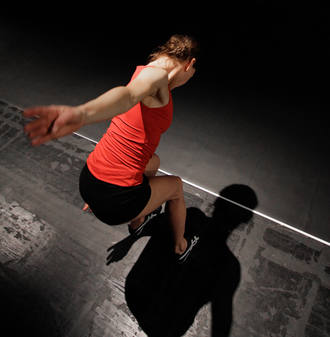