Visual artist Darko Dragicevic and choreographer Martin Sonderkamp investigate the simultaneity of two processes: The unfolding of existing and absent space into a bodily interior and the simultaneous expansion and drawing of an inner space into a spatial exterior. On the basis of these reciprocal inscriptions, the performers negotiate potential spaces of interaction in which space and body are equal-ranking actors. Movement and visual language are divided into elementary, choreographic particles. The affective-sensory systems, developed on this basis, their different functions, as well as their placements in space are used as concrete forms for their visceral and visual dialogue.

In the frame of the dance campaign „Watch Me Dance“. 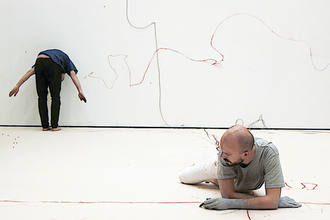