Lab 2: Remembering the Future of Diversity in Dance – fully booked

In the frame of Open Spaces/Sommer Tanz 2018

A one-day lab invites participants from a range of different backgrounds to remember the future of physical diversity in dance in Berlin. Dance practitioners Adam Benjamin, Michael Turinsky, Jess Curtis and Jo Parkes will facilitate conversations and practice-oriented exchange formats that dream up a not too distant future of physical diversity in dance education, training, choreographic practice and curating, and look for ways to work back until today. The lab takes place in the context of Tanzfabrik Berlin’s 40th anniversary, the Open Spaces#2 / Sommer Tanz programmes, as well as in cooperation with the initiative tanzfähig and the Inter-University Centre for Dance Berlin (HZT).

We would like to ask for a few sentences from each person wishing to take part, briefly stating their background and motivation to join. Please add this to your online registration under “notes”. The lab is free, but the number of participants is limited.

Adam Benjamin (UK) is a choreographer, author and one of the pioneers of integrated dance. His book Making an Entrance. Theory and practice for disabled and non-disabled dancers (Routledge 2002) is considered a seminal text. He has received numerous awards including a London TimeOut performance award, the Sainsbury’s award for education, a National Teaching Fellowship. He has been an Associate Artist at The Place, a Wingate Scholar, a Rayne Choreographic Fellow, recipient of an Arts Council International Artist Fellowship and was named a Change Maker by the South Bank Centre in 2015. He was joint founder of CandoCo Dance Company and a founding member of 5 Men Dancing. His most recent choreographic work is Marked for Exim Dance Company. He has taught and performed with a.o. Russell Maliphant, Kirstie Simson, Jordi Cortés and Gabriele Reuter. www.adambenjamin.co.uk

Jess Curtis is an award-winning choreographer, performer and scholar committed to an art-making practice informed by experimentation, innovation, critical discourse and social relevance at the intersections of fine art and popular culture. Curtis has created and performed multidisciplinary dance performance throughout the U.S., Europe with seminal group Contraband, the radical performance collective CORE and the experimental French Circus company Cahin-Caha, Cirque Batard. From 1991 to 1998 he co-directed the ground-breaking San Francisco performance venue 848 Community Space with Keith Hennessy and Michael Whitson. In 2000, Curtis founded his own trans-continental performance company, Jess Curtis/Gravity, based in Berlin and San Francisco. In 2011 he was presented the prestigious Alpert Award in the Arts for choreography and the Homer Avila Award for innovation in physically diverse performance. Curtis is active as a writer, advocate and community organizer in the fields of contemporary dance and performance and teaches Dance, Contact Improvisation and Interdisciplinary Performance for individuals of all abilities throughout the US and Europe. He has been a visiting professor at the University of California at Berkeley and the University of the Arts in Berlin. He holds an MFA in Choreography and a Ph.D. in Performance Studies from the University of California at Davis. www.jesscurtisgravity.org

Jo Parkes is a freelance dance artist / director (D / UK). She creates participatory pieces: installations, performance for public spaces and for video. Jo is the founder and artistic director of Mobile Dance e.V. Mobile Dance works socially engaged with co-creative processes, often with people with difficult access to participatory artistic work, among others in the international video series "Postcards from ..." (2009 - 2017) and since 2014 JUNCTION, a program of dance and video workshops in five accommodations for refugees in Berlin. Jo is internationally invited as a guest lecturer in Community Dance, i.e. DOCH, University of Bern, UdK, HZT. In 1995 Jo received a Fulbright scholarship to study. She graduated in choreography at the University of California (UCLA), earned a First Class degree in English Literature and English at the University of Oxford, and won the Bonnie Bird Award New Choreography in 2002. In 2009, she received the project " Postcards from Berlin" the children for the Olympic Award. In 2016, she received a scholarship from the Berlin Senate. The piece "On Tradition: the young generation" would be invited to dance meetings of the Youth. www.mobile-dance.com www.joparkes.com

Michael Turinsky lives and works as a choreographer, performer and theorist in Vienna. He is interested, on the one hand, in an in-depth discussion of the specific phenomenology of the body marked as "handicapped", and on the other in the rigorous examination of discourses around the productive tension between politics and aesthetics. Between 1998 and 2005 he studied philosophy at the University of Vienna. As a performer, he collaborated among others with Bert Gstettner, Barbara Kraus, Legitimate Bodies / Robin Dingemans / Mick Bryson and Doris Uhlich ("Ravemachine"). His most important choreographic work "heteronomous male" (2012), "my body, your pleasure" (2014), as well as his recent works "Second Skin - turn the beat around" and "Second Skin - Master of Ceremony" (both 2016) , His collaboration with Doris Uhlich "Ravemachine" received the 2017 Nestroy Special Prize. Michael Turinsky gave lectures and workshops, among others at the Universities of Linz and Salzburg, at the College Art Association in New York, at the Tanzquartier Wien as well as at Impulstanz-Festival. He published in various journals and journals. www.michaelturinsky.org 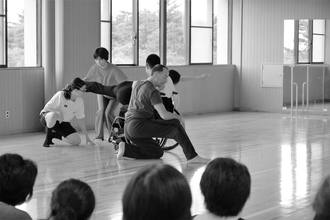