The fear of invisibility in our digitized world becomes a driving force for physical and choreographic questions. Over the course of this debate, »sight seeing« is confronted with what constitutes a human being and what
constitutes the inhuman. The influence of human beings on the planet has recently become more than visible so that humanity itself can be seen as a geological force. This point of view is used to destabilize the anthropocentric perspective and to conduct research into the fragility of a multi-
dimensional corporeality. In dialogue with Lynn Suemitsu, Julian Weber establishes a temporary living space which invites the spectator to engage in »sight seeing«.

An exploration of the fragility of a multidimensional corporeality. 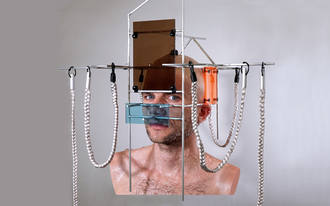