Supported by a sampler and a vocoder, Gérald Kurdian tells the story of the antihero Trk_x and his encounters during the sexual revolutions of the 20th and 21st centuries in seven songs and two danced interludes. For »Hot Bodies - Stand Up«, the French musician, performer and radio artist creates a sensual collage of materials and formats such as opera, stand-up-comedy, choreography and documentary, mixing interviews with people whose sexuality or gender is an act of resistance with texts on feminist or queer activism.

A collective experience of our drives, in which physical and sexual energies are liberated while our bodies, histories and future utopias are reinvented.

28.10. After Talk following the performance 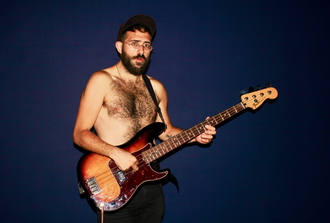