From the Inside Out

In the frame of Sommer Tanz 2020 - Meeting in the Virtual!

The workshop is inspired and influenced by Nelson’s over 35 years of continuing study in several somatic practices, including the Feldenkrais Method® and Klein Technique™, as well as other techniques such as Alexander Technique® and Body-Mind Centering®. Using simple exercises and movement directives leading into improvisation, we will approach our bodies as places of inquiry where we can examine our movement patterns and interests and open ourselves to the possibility of change. The workshop will emphasize the idea of physical research as a way to deepen awareness of the whole body, in order to discover and explore full and expressive movement. Adapted for the Zoom format, the workshop will be structured to allow participants to follow and participate, as well as see and be seen.

Jeremy Nelson, Associate Professor in Tisch School of the Arts at New York University, is a dancer/choreographer and former member of the Siobhan Davies Dancers and Second Stride Dance companies in London, and Stephen Petronio Dance Company in New York. He has also danced in the work of Mia Lawrence, David Zambrano, Susan Rethorst, Luis Lara Malvaci­as, and in his own work, and with improviser Kirstie Simson. He received a New York Dance and performance Bessie Award for outstanding performance in 1991 and a Guggenheim Fellowship for choreography in 2004. From 2009- 2015, he served as the director of dance education department of Danish National Academy of Performing Arts. He is a faculty member of Movement Research in New York and over the past more than 35 years has taught classes/workshops in over 30 countries at venues including a.o. American Dance Festival, ImPulsTanz, P.A.R.T.S., and the Sasha Waltz Company. 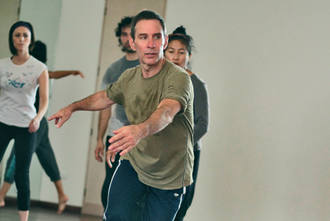